Need help? Please contact us at the information below.

13 most popular and scared pagodas in Hanoi

Going to the temple to pray for luck and peace is a long-standing custom of Vietnamese people, especially on the occasion of the new year. Let’s find out 12 famous pagodas in Hanoi:

Architecture of Ha pagoda is the combination of ancient and modern beauty, the outermost is Tam Quan gate with 3 arches and the widest designed middle door.Tam Quan is built into 2 floors and has stairs to go up on the left. Upper floor is built in the style of a pile of matches and the lower floor is divided into 3 compartments and 12 pillars are built on the surface. Passing through the temple gate is a semi-circular lake and a green garden. Next to the lake is the four-sided St. Duc Tu Bi stone stele. The main turtle has a Dinh-shaped structure with Tien Duong and Thuong Dien, a three-room suite of 5 large spaces, and the temple's temple hall is arranged with many large. Behind the main hall of Ha pagoda is Dien Mau with the temple in the front and the shrine in the back.

Nowadays, the ancient artifacts in the temple have been replaced with new offerings by the people. However,Ha Pagoda, Hanoi still not lose the inherent old beauty. It can be said that this is an attractive destination in Hanoi.

Huong pagoda in Huong Son commune, My Duc district, Hanoi is also one of the temples mentioned by tourists from all four directions.This is a cultural - religious complex consisting of many different temples and pagodas. Huong is at any time of the year. However, the period from January to March of lunar calendar is the time when Buddhists near and far flock to the temple with the largest volume. Going to Huong pagoda is not only a pilgrimage to Buddha but you also have the opportunity to visit and explore the charming mountain scenery of this place. It takes about 2-3 hours, you can choose from vehicles such as: motorbikes, cars, buses to get here, some famous temples and caves in the famous complex of Huong pagoda such as: Huong Tich Cave, Thien Tru Pagoda, Trinh Temple, Giai Oan Pagoda, Long Van Pagoda, Long Van Cave, ... 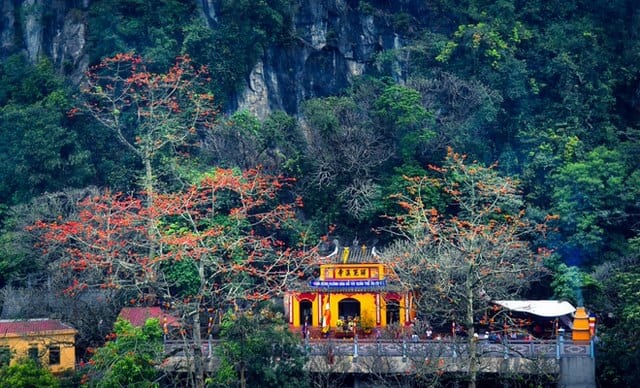 Tran Quoc Pagoda has an overall area of about 3000m2 with many trees and a lake in front, creating a poetic but still majestic scene of the spiritual place in the heart of the capital. Tran Quoc is a pagoda built according to the Tonkin sect including 3 main houses: The street money, the burnt house, and the upper house connected together to form the word Cong. In 1989, Tran Quoc pagoda was recognized as a National-level Cultural and Historical Site.

On the full moon day or the first day of every month, people in the capital come to Tran Quoc Pagoda in large numbers to pray for health and luck for their families, especially on the New Year's Day, tourists flock to the pagoda for pilgrimage, Buddha's ceremony and pagoda scene. 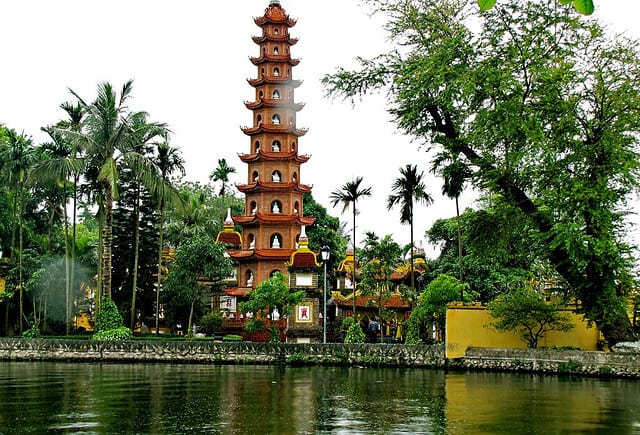 One Pillar Pagoda, also known as the Temple of Secret, Dien Huu Tu or Lien Hoa Dai is one of the temples with unique architecture in the heart of Hanoi capital, the temple is built mainly of wood, with a pillar Main stone, above the column is a small temple and surrounded by a clear blue lake.If in general, this design is very similar to a lotus growing on the lake surface but far One Pillar Pagoda still retains the inherent ancient and quiet features.

From the outside to the temple you will have to step through 13 brick steps to be able to burn incense. The inside of the pagoda sits a statue of Guan Yin Buddha sitting on a lotus in the highest position, radiating a halo, and a large bodhi tree planted by the President of India in 1958 on the occasion of President Ho Chi Minh Minh visiting India.

One Pillar Pagoda is one of pagodas in Hanoi recognized as the most unique pagoda in Asia and a tourist destination not to be missed by visitors when coming to Hanoi. 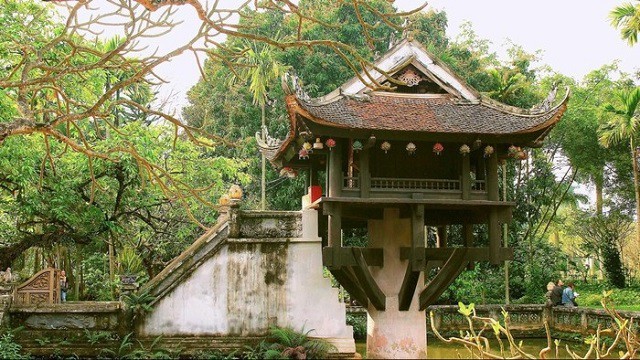 Being a temple located in a residential area of Dong Da district, these small temples are always crowded with Buddhists from near and far who come to pray for Buddha and pray for security.Chua Phuc Khanh was built in the Hau Le dynasty, so far has passed. Many times restored and renovated but still retains the old traditional architecture with Tam Quan including 3 arches, the main door is larger than the two side doors, behind Tam Quan is the temple courtyard. The temple includes Tien Duong and harem In which, Tien Duong consists of 5 compartments, harem has 3 compartments, electric model and To house have design because of over time.

On the full moon day or the first day of the year, you will see people coming in and out of Phuc Khanh pagoda on a pilgrimage, especially at the beginning of the year, thousands of people flock to this as a ceremony to celebrate stars. 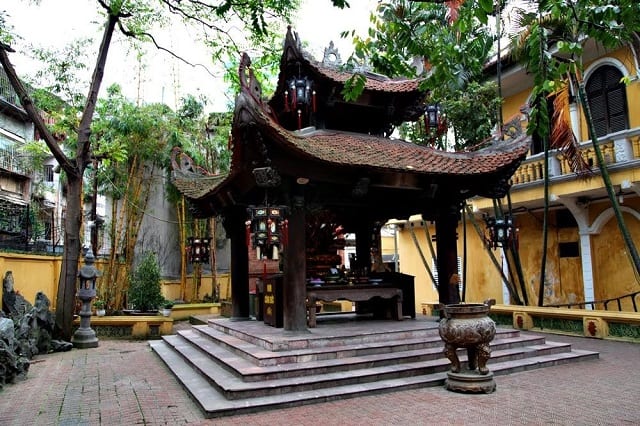 Lang pagoda, also known as Chieu Thien Tu, is one of the pagodas in Hanoi It is located in Dong Da district. Thanks to its harmonious architecture, this place was once considered the "worst part of the forest" in the area west of ancient Thang Long citadel.

Lang pagoda architecture has a gate similar to the gate of the ancient king, consisting of 4 square pillars and 3 curved roofs attached to the pillars. The palanquin is used to place the palanquin during festivals. Go to the end of the yard, which is the Tam Quan gate, through the Tam Quan gate, you will come to that drunk octagonal house to the main area of the temple including: Main hall, incense burning house and upper house.

Lang Pagoda is one of the temples that owns the most Buddha statues in Vietnam with a total of 198 statues. Because of the many restoration works, this temple no longer has ancient relics. 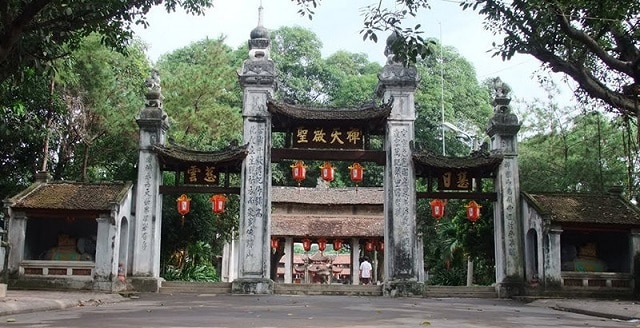 Boc Pagoda located in Quang Trung ward, Dong Da district is a pagoda in Hanoi The pagoda was associated with the victory of the Ky Dau in 1789 by Tay Son army. Previously, this temple only worshiped Buddha, but then the pagoda also worshiped the king who made merit to the nation - King Quang Trung and those who died in battle.

The pagoda has a high position, beautiful terrain, with a large lake in front, the architecture includes Tam Quan gate, Tam Bao, Mau church, tower garden. Up to now, Boc Pagoda still preserves many ancient precious objects and heritages for visitors to come here to have the opportunity to visit and learn. 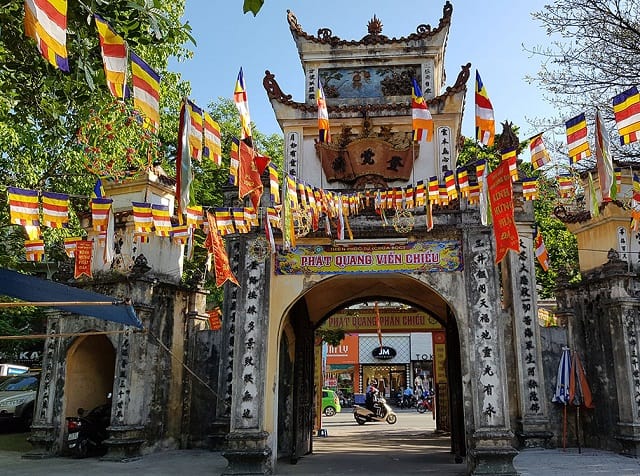 A pagoda in Gia Phuc village, Nguyen Trai commune, Thuong Tin district, Hanoi, Dau Pagoda is a worship of the goddess Phap Vu, also known as Mrs. Dau, about 24km south of Hanoi city center. This unique architecture in the style of "pre-Buddha, post-saint" typical for the flourishing folk art in the 17th century. Tam

Quan's old pagoda is a common attic, two floors with eight roofs. columns, beams are touched wide, pillars and stone pedestals are carved with lotus flowers. In addition, the eight-door doors are all carved with four-pointed spirits, four-door jewels, lacquer, gold-plated,….
Especially at Dau pagoda, there are two burial statues of the monks Vu Khac Minh and Vu Khac Truong, who are the two abbot of Dau Pagoda after his death, leaving their Xa Loi. 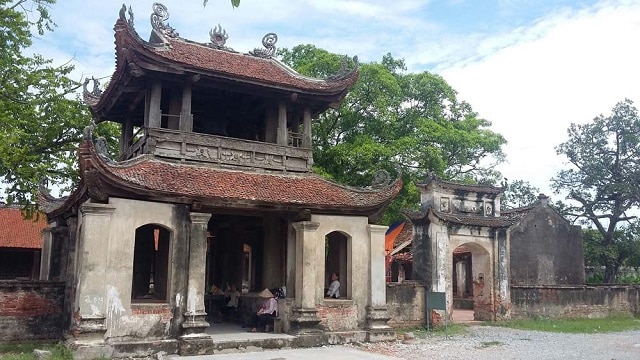 Located at 73 Quan Su, Hoan Kiem District, about 1 km from Hoan Kiem Lake, the pagoda was built in the 15th century and is now the headquarters of the Central Vietnam Buddhist Association bearing the style of the northern midland plains with dome and tile scales. The most special thing is that the name of the temple and the matching sentences are written in the national language, which is very rare in the pagodas in Hanoi. To visit Buddha's ceremony, you can come from 6am to about 7pm daily. The first occasion of the year is the opportunity for people to return to Quan Su Pagoda to do the most Buddhist pilgrimage. 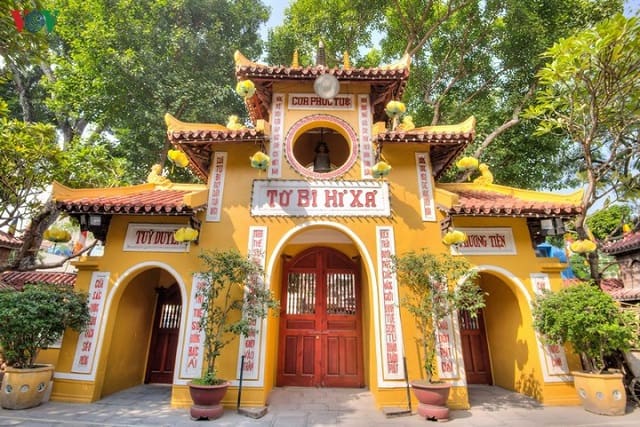 Located on Kham Thien street, Dong Da district, Hanoi, Linh Ung pagoda is one of the pagodas with architectural style of Nguyen Dynasty. Tam Quan is built 2 floors with 3 arches and above is the 8-roof bell tower. Through many times of restoration, but up to now, the pagoda still preserves and preserves precious artifacts dating back to the 19th and 20th century.

Linh Ung Pagoda is ranked as a national historical and cultural relic that many Buddhists come to visit and visit the pagoda. 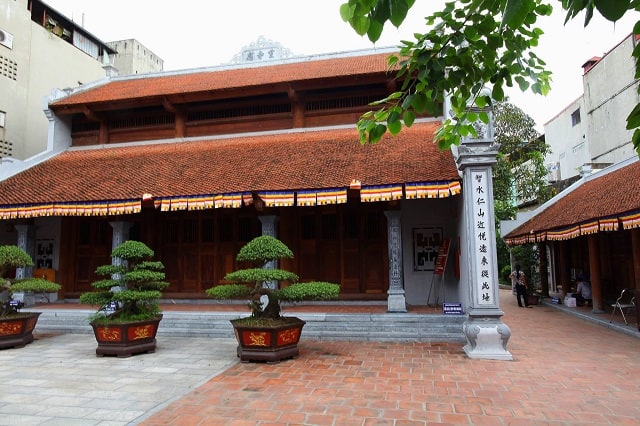 Phap Van Pagoda, also known as Chua Nanh is located in the North, about 20km from the center of Hanoi in Nanh village, Ninh Hiep, Gia Lam, Hanoi. 100 spaces, wide front yard. This is one of the pagodas in Hanoi with a unique architecture with two sides of the gable built 2 small corners, each with 4 roofs, 4 curved blades radiating from 4 sides.

The pagoda has a total of 116 meticulously sculpted statues and many rare remains from the previous dynasties. 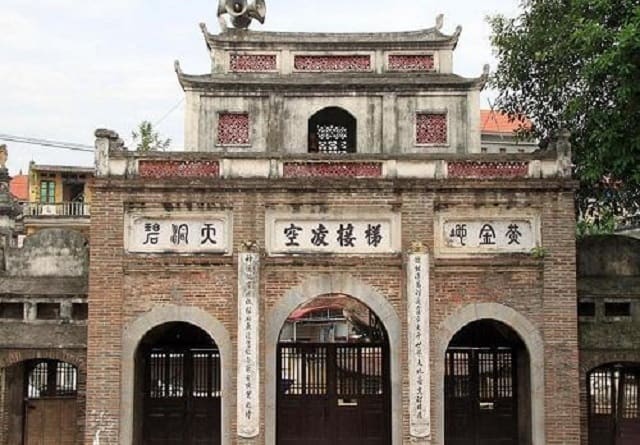 Located at the foot of Sai Son mountain, Quoc Oai district, this is one of the sacred pagodas in Hanoi. Previously, the pagoda was only a small house, then rebuilt by King Ly Nhan Tong and underwent many restoration and renovation to get the present appearance into three courts of: Ha pagoda, Trung pagoda, and Thuong pagoda, in which Ha pagoda and Trung pagoda are connected together to create the highest attack position.

The pagoda is worshiped by many Buddhists from near and far every day, especially during festivals, many pilgrims come to the temple. 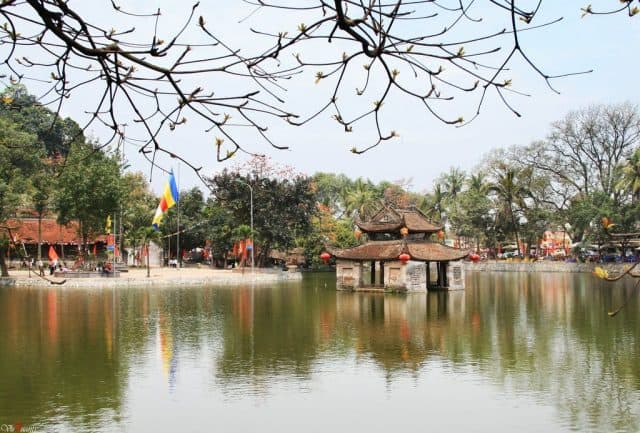 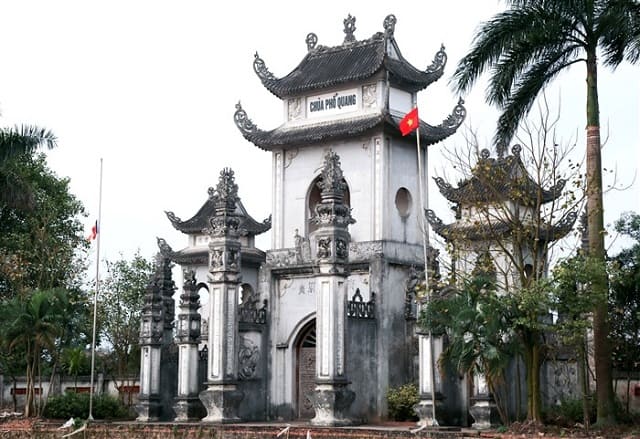 Whether you are in Hanoi or all over the country, if you have the opportunity to come to Hanoi, visit these temples to better understand Vietnamese customs and culture. Hanoi is very crowded for pagodas, praying for luck.If you are far away, please take advantage of booking a Hanoi hotel room, book tickets as well as plan your trip in advance to have the most convenient spring trip.